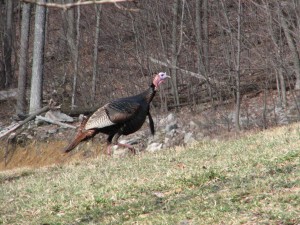 For many Thanksgiving Day involves a turkey dinner. While many of us head to the market and buy our birds, the pilgrims would have hunted for their birds.

This hunting by the settlers had all but eliminated wild turkeys by the mid-1800s. Wild turkeys were missing from large areas of their native range by unrestricted hunting and habitat destruction. In Pennsylvania, a few managed to hang on in the Ridge and Valley region of the central portion of the state.

The creation of the Pennsylvania Game Commission, the implementation of restrictions on hunting and the forests’ gradual recovery from the widespread clearcutting of the late 1800s and early 1900s paved the way for the turkeys’ restoration.

By 2000 Pennsylvania’s wild turkey population was estimated at 400,000 birds and flocks are a common sight throughout the state, even in some suburban areas. The best 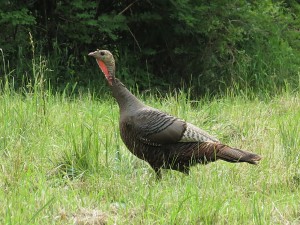 turkey habitat in northcentral Pennsylvania is composed of extensive woodland interspersed with open areas or farm fields where young birds can feed on the grasshoppers and other insects that they need for proper development. Habitat is the key to healthy wildlife populations.

Turkeys have shown more tolerance for fragmented habitat (woodlots) and human disturbance than previously believed, but they still depend on forested habitats and do best with limited human activity. Habitat diversity — varying habitat types and differing ages — is the key to good turkey habitat. Turkeys seem to do best with a mix of forested, actively farmed and reverting-farmland habitat types.

In spring, turkeys eat tender greens, shoots, tubers, leftover nuts and early insects. As the weather warms up, they eat more insects, including grasshoppers, walking-sticks, beetles, weevils, dragonflies, ants and larvae. But even in summer, a majority of the diet (perhaps 90 percent) is vegetable. A wide variety of plant species are eaten, as well as a number of plant parts, including fruits, seeds, seedheads, tubers, roots, bulbs, stems, leaves, flowers and buds. 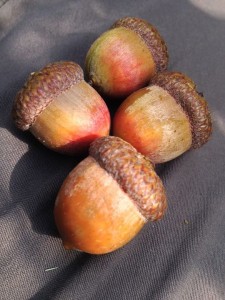 In fall, turkeys eat mast (beechnuts, acorns); fruits (dogwood, grape, cherry, gum, thornapple); and seeds (grasses and sedges, ash, corn, oats, weeds). During winter, they rely on seeds, nuts and fruits left over from autumn, and on green plants, crustaceans and insect larvae found in and around spring seeps where groundwater emerges along a hillside or in a flat. Temperature of this water is above freezing, so the seeps remain open all winter, providing food for turkeys and other wildlife.

A turkey often scratches for its food, kicking forest duff and leaves behind. If the bird finds an acorn, it picks up the nut in its beak, straightens its neck, and swallows. The nut is stored in the bird’s crop, a flexible “bag” in which juices and body heat work to soften it. Then the nut passes into the gizzard, an enlarged, thick-walled section of the food canal that contains small stones and gravel called grit. Strong muscles use the grit to grind down the acorn.