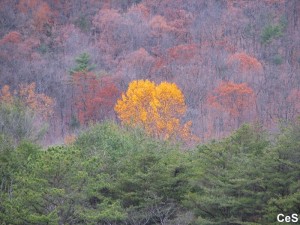 Most tree leaves will fall by the end of October, but some species’ leaves turn color and are held much longer than others. Now the last of the yellow leaves stand out on the hillsides. Some of the aspens, both quaking and bigtooth, are gleaming yellow but now the brightest yellow leaves are borne on the tulip-poplars. Rare in the northern counties of NPC’s area, but fairly common on moist fertile soils in the southern portion, tulip-poplar is often the tallest tree in the woods. It’s named for its tulip-shaped flowers and its leaves which resemble a tulip flower in profile. 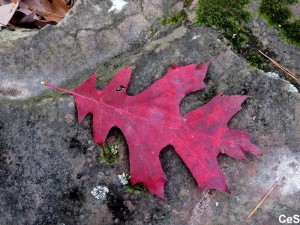 Also turning color now are the various oaks: red, white, black, chestnut, pin, and scarlet. There are other oaks in northcentral Pennsylvania, but those six are by far the most common. Some merely turn a drab yellowish-brown, but red and scarlet oaks can often display a rather striking red. Many oaks, particularly young trees, and American beech don’t form a good abscission layer (the corky layer that develops at the base of the leaf’s stem that cuts off water flow to the leaf and later breaks to let the leaf flutter to the ground) resulting in leaves that hang on the trees late into the winter and sometimes until spring.