Fifty years ago it was an unusual occurrence to have a number of tufted titmice visiting a feeder in northcentral Pennsylvania every day. Following a hard winter they might disappear for a year or more until young birds wandering into territories unoccupied since the death of the previous residents re-established a population. As winters have warmed over the last few decades the tufted titmouse, generally considered a southern species, have become permanent and common residents of woodlands, fencerows, brushy fields and suburban areas in northcentral Pennsylvania. Titmice frequently are members of feeding cohorts which include chickadees, nuthatches, and downy woodpeckers – each species feeds on similar food items but has a different method of foraging and thus don’t actually compete for food. 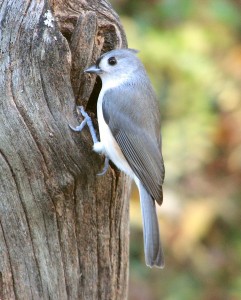 But, if we think of bird feeders as the avian equivalent of a fancy restaurant it should be readily apparent that feeders are not the be-all and end-all of what these birds need. They also need a place to live – correctly called habitat. That habitat must include winter roosting sites and nesting site, both being tree hollows or similar cavities, as well as other sources of food including insects and cover in which to escape inclement weather and predators.

The Cornell Lab of Ornithology has a recording of the tufted titmouse’s song on their website.  If you visit National Geographic’s website you’ll see drawings of a juvenile and adult as well as a map showing their range.