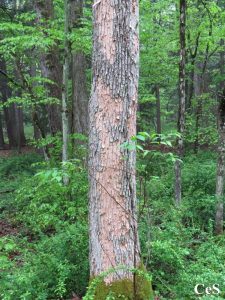 This may sound a bit like Paul Revere warning about the British, but it’s actually about the wave of dying trees, white ash and green ash, that’s sweeping across northcentral Pennsylvania. It’s not the loggers or arborists that are killing the ash trees;they’re just salvaging or removing the dying trees before those trees are totally worthless or pose a danger to people or property.

Which brings the question“Why are the ash trees dying?”The trees are dying because they’re being attacked by the emerald ash borer, an insect less than an inch long and is well named since it is, indeed, emerald green. It was introduced in packing material in shipments from northeast Asia. First detected in Michigan in 2002, it has since spread to many other states killing an estimated 50 million ash trees as it has moved east across the range of native ashes.

Six or seven years ago ash trees began showing light patches on their bark. Those light patches are created when woodpeckers flake off the outer bark’s ridges as they search for emerald ash borer larvae. The woodpeckers’ feeding doesn’t harm the tree; it’s the beetle larvae feeding on the trees’ cambium layer and inner bark that actually kills the trees. When there are a lot of larvae the tree will die–and there are a LOT or larvae.

When the emerald ash borer attacks a tree the tree usually dies in about three years. Once the emerald ash borer moves into an area until almost all the ash trees are dead usually takes less than ten years. So, it’s not the loggers or arborists that are killing the trees, it’s that pretty little beetle.Adult emerald ash borers emerge through tree’s bark through“D”-shaped holes, usually in May or June. They then mate and females lay their eggs on the bark of ash trees in July. When the eggs hatch, the larvae bore through the bark and begin feeding, which continues through the fall.The larvae over-winter in the tree, pupate and metamorphose into adults to begin the cycle again.

Landowners are salvaging their ash trees as they die or even before, as dead ash trees deteriorate very quickly and become worthless. Since the trees deteriorate so rapidly, affected ash trees in urban and suburban settings quickly become a threat as branches and large limbs break off and fall.There is no spray that can reach larvae beneath the bark. Although there are insecticides that can be injected into valuable individual ash shade trees or applied to the soil beneath the tree, the treatments must be applied repeatedly. These are not practical and much too expensive to use in woodland. There are some promising biological controls being tested, these are primarily insect parasites of emerald ash borers eggs or larvae.