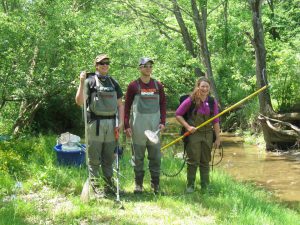 The northcentral Pennsylvania stream restoration partnership is in its seventh year of working together, and third year of collecting fish and macroinvertebrate information at select sites before construction takes place.

The data on fish species found and mactoinvertebrates present will be forwarded by SUFRI to Pennsylvania Fish and Boat Commission’s unassessed waters staff.  It will also be used by in comparison with data collected 1-year and 2-years post construction. This will allow the SUFRI researchers to determine if the log vanes, mudsills, and random boulders are decreasing the sedimentation and increasing fish habitat. 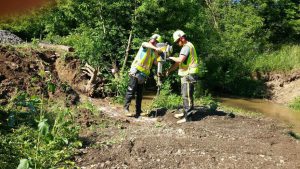 Construction began June 6, 2016. It is anticipated the work will take 3 to 4 days, and will result in a stable stream bank, a stabilized Ag. Crossing (the landowner’s daughters horseback ride), and a wider buffer.

After walking the site and reviewing where the fish habitat/stabilization structures will be placed, Dr. Niles had David 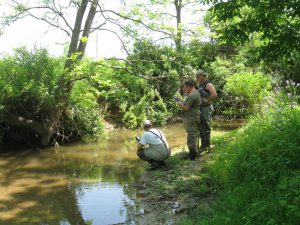 and James collect some basic information – the water’s temperature and conductivity (this helps them understand how to set the electrofishing backpack).

After Dr. Niles provided instructions, assigned jobs, and started the electrofishing backpacks, they were underway. James tied off the tape measure so they would know when they had complete their 100 meters. 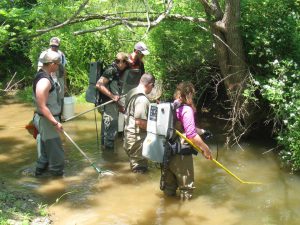 Ali and Quentin worked the backpacks. They would send an electric charge into the water to stun the fish, and James, Bennett, David, and Dr. Niles would scoop up the fish in nets.

After the entire 100 meter stretch was electrofished, the team gathered back at the sorting bin. They began taking the fish out, one by one, and identifying them. 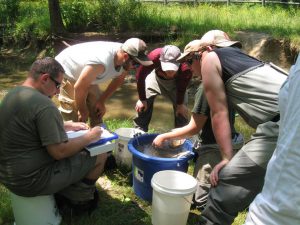 The trout were also weighed and measured. David returned the trout to a deep pool above the sampling area as soon as possible to reduce the stress on the fish.

After the fish were tallied, the students collected macroinvertebrates using kick nets. The samples were jarred up and taken to the lab.