The TV weather folks give reports on more than just the weather, they also give daily updates on when and where the fall foliage colors are peaking. But, the peak varies from place to place and by the day. However, the most brilliant fall colors tend to occur where sugar maple grows which is why the best fall colors tend to occur in the northern portion of our region where sugar maple is a common tree. The color displayed by sugar maple varies from pale yellow to bright red, but most commonly varies from golden yellow to orange. Sugar maple is the tree that provides maple syrup and bowling alleys in addition to a feast for the eyes. 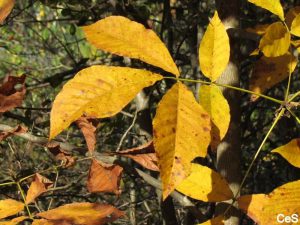 It’s not just sugar maple that colors the hillsides in the middle of fall foliage season, many other trees are at the peak of their color now. In the southern part of our region the hickories are now displaying their glowing yellow color. There are four common hickories in northcentral Pennsylvania: bitternut, named for the flavor of its nuts; pignut, so called because its small very hard nut were deemed fit only to feed to hogs; mockernut, the thick hulls of its nuts conceal a small nut thus mocking anyone who thinks they’ve found a large nut; and shagbark which derives its name from its usually very long loose scaly bark.

Enjoy the peak of fall colors they’ll soon fade to the grays and browns of late fall.