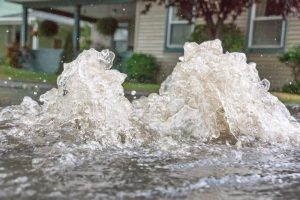 Yesterday, June 28, 2016, the Williamsport area received over two inches of rain in about an hour. That’s a lot of rain. In a short period of time.

The photo on the left is of a storm drain in Montoursville (a borough about 6 miles east of Williamsport) on one of the streets that wasn’t draining. In fact, this is a photo of water bubbling up out of the storm drain. There was so much water already in the storm sewers and it was under so much pressure, it pushed up, out of the drain while more water was waiting to use the drain.

I’m sure you’re thinking, “Okay, this is interesting, but what does this have to do with NPC?”  Well, unpaved ground (think dirt, forest floor, grass, planted farm fields, etc) soaks up and absorbs ground water, like a sponge. Once you cover up the surface, with a house, larger building, paved street, brick sidewalk, etc. you remove the ability of the water to enter the ground, and the water “runs off.” 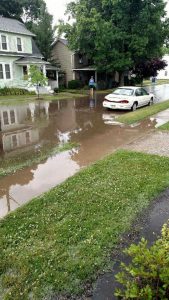 The theory used to be to get the run-off water out of the way as soon as possible. You wanted to move the water into the street and into the storm drain. The storm drains would then carry the water away and discharge it into, typically, a creek or river. Out of sight and out of mind.

However, as we’ve built more houses, created more parking lots, and paved more streets we’ve covered up more ground. Areas that could absorb water 5, 10, or 15 years ago are now adding water to the storm drains. More water in the storm drains, means more run-off into our creeks and rivers. More water entering the creek or river can create more flooding along the creek or river.

Typically, this run-off water picks up speed as it runs down the street, down the storm drain, and into the creek or river. Again, the thought in the past was to get it out of the way as soon as possible. The higher speed can also create habitat problems. The speed of the water can move the rocks and gravel on the stream bottom and also cause erosion, adding sediment to the stream.

So, the more open areas there are, the more water will be absorbed. Once that water is absorbed it becomes groundwater. Over time, the groundwater is slowly released into streams, creeks, and rivers. This slow release over time allows waterways to maintain water levels during summer months and also helps regulate the temperature in streams.

Thank you to all the members, donors, supporters, and partners who help conserve open space in northcentral PA. You may not have realized it, but you’re also reducing stormwater and increasing groundwater.

If you’re interested in learning more about stormwater, check out the Center for Stormwater Management.