At the end of the month, the National Park Service is turning 100 years old.  While your support of NPC hasn’t resulted in any acreage being added to National Parks it has resulted in over 6,000 acres being added to Pennsylvania’s State Forests, State Game Lands, some acreage going to a municipal park, and another conservation organization maintaining a property for public recreational use. 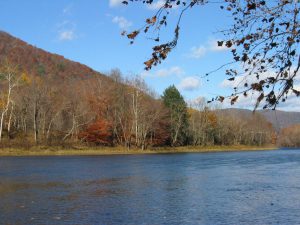 The Townsend Acquisition was 117 acres in Lycoming County. It was the first project NPC’s members made possible. With the help of those early members NPC purchased it at a tax sale in 1991.

It is quite a property. It bordered the Tiadaghton State Forest on three sides and has three-quarters of a mile of frontage on Pine Creek on the fourth side. This made this property more or less an inholding to the State Forest. When inholdings are for sale, the Bureau of Forestry will try to acquire them if there are other conservation attributes to the property. 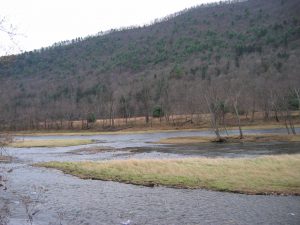 The Townsend property did. It had an old field from the time generations ago when the bottomland was farmed; the steeper areas have always been wooded, and remain so today. The property is also within the viewshed of motorists on PA Route 44, canoeists and fishermen on Pine Creek and users of the Pine Creek Rail-trail

NPC’s members helped protect this property to help maintain the pastoral character of the Pine Creek valley. NPC transferred the property to DCNR’s Bureau of Forestry in 1992; it is now managed as part of the surrounding state forest.