Bullfrogs are the largest frog native to 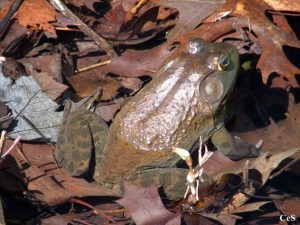 Pennsylvania and are found throughout the state in lakes, ponds and wetlands and along the edge of streams. They are voracious eaters, taking insects, small frogs (even of their own species) and occasionally small ducklings. Bullfrogs are usually varying shades of green in color, although some may be brownish, and have a dorsal fold that begins behind the eye and bends around the tympanum to near the front leg – if the dorsal fold continues along the back to the hind legs the animal is a green frog, a different species. These are the frogs that make the “jug-a-rum” that so many of us have heard as we’ve fished or sat lake-side after dusk. Bullfrog tadpoles may take up to three years to mature and metamorphose into adults. Bullfrogs have been introduced in many areas (western U.S., Europe, Japan and China) where they are not native and have become an invasive exotic species.

Check out this National Geographic webpage for more information and to listen to the bullfrog’s call.