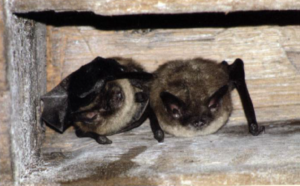 Why, you may ask, should you appreciate bats? Lots of reasons. One specific reason is, bats feed on insects. They eat LARGE numbers of insects. This is important especially if you like to eat. Bats eat pests like moths, beetles, flies, true bugs, termites, and flying ants. Many of these pests cause problems with farmers’ crops and even your backyard garden. Bats can help keep the pest numbers in check which allows your fruits and vegetables to grow better.

A single little brown bat in Pennsylvania can consume up to 33% of its body weight in insects each night. That’s pretty impressive, but then when you realize that could be up to 3,000 insects a night, it becomes even more impressive.

One of the faculty at Susquehanna University NPC staff interact with studies mammals and provided information for today’s appreciation of bats. Dr. Iudica has spent time studying the little brown bat, Myotis Iucifugus. Its scientific name translates to “the animal with ears like a mouse that flees the light and goes back to its roost at daybreak.”

The little brown bat is a small bat. Typically in the spring, coming out of hibernation it weighs 5 to 10 grams (that’s 0.01 to 0.02 pounds) while in the fall it’s up to 6 to 11 grams. The bat has dark brown dorsal and light-beige ventral fur.

During the summer, the pregnant little brown bat females form large nursery colonies while the males roost alone or in small groups. The summer roost may be between the rafters in a house or a barn. Males will tend to summer roost in more natural places, but still may be found in man-made buildings, just away from the females.

Baby little brown bats are typically born in June. Known as a pup, the baby is ready to fly after 3 weeks. 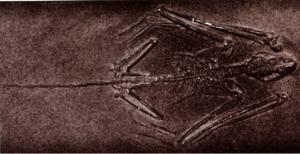 Thank you to Dr. Carlos A. Iudica.  He shared his photos for this post. Here is a photo he took of a bat fossil in Wyoming. The oldest fossils of bats are from the Eocene which was about 50 million years ago. This fossil is from this timeframe.