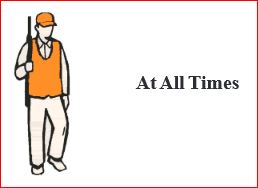 This past Monday was the beginning of antlered deer hunting season in PA. Statewide the general firearms season runs until December 12, 2015. So, if you’re going to be in the woods or on the trails Saturday it’s certainly a good idea to wear the required fluorescent orange, even if you’re not hunting. Here’s a handy graphic to help you remember that hunters are required to wear 250 square inches of fluorescent orange on their head, chest, and back combined that is visible from 360 degrees. Even if you’re not hunting, make sure hunters can see you. 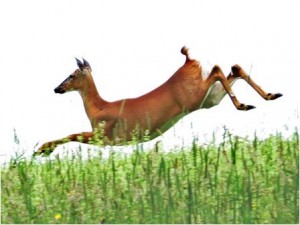 PA is home to the white-tailed deer, or Odocoileus virginianus. The name, white-tailed, reflects the underside of a deer’s tail which is covered with white hair. When a deer runs it often holds its tail erect so that the white undersurface is visible.  This photo doesn’t really give you a view of the white underside, but you can see how a deer holds its tail up (Charlie took this photo on the Nicholas Easement).

White–tailed deer are ruminants and like cattle have a four chambered stomach. Deer eat without chewing their food thoroughly. Later they lie down, regurgitate what they have eaten and chew more thoroughly. 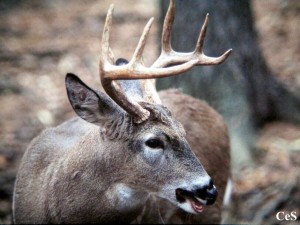 Because of their diet of tough fibrous twigs, leaves, acorns and other vegetation, a deer’s age can be determined by checking the wear on their teeth. Wildlife biologists will examine jaw bones of harvested deer to determine the age of harvested deer. These numbers then help them estimate age class structure.