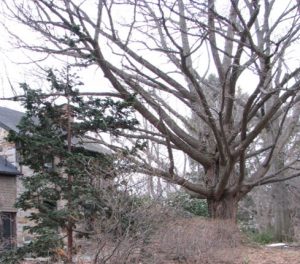 A landowner with a property under conservation easement recently reached out to NPC about a concern with the property’s ginko tree. This year the tree didn’t bear fruit and the landowner was concerned this could be a sign of declining health.

Charlie explained, “Fruiting in most trees, from apples to oaks and all the rest normally have a fruiting cycle of fruiting heavily for a year or two and then having little or no fruit the following year. Our apple had a bumper crop last year, probably four bushels from one tree — this year it had six or eight flowers and only one apple, which fell when it was only half size.

“Trees need a “rest” year to build up their reserves after fruiting heavily.

“This year’s very dry summer may have caused the tree to abort whatever fruit that was forming in order for the tree to keep its leaves making sugars.

“A tree that’s having difficulty often does what is called “distress fruiting” and puts out a tremendous crop(s) of fruit — probably to insure that some of its genetic material survives its demise.

“As long as the crown has its normal complement of leaves and they weren’t extremely pale or yellow the tree is probably alright. The summer drought may even have caused the tree to drop its leaves earlier than normal, although most trees did not.”