Happy first day of Spring! If you’re in northcentral 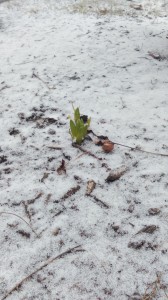 Pennsylvania it’s probably snowing outside your window and not looking very spring-like. The photo was taken this morning in my yard. So, while the piles of snow are gone, there is again snow falling to the ground.

While you’re waiting for the snow to accumulate enough to go shovel, take a look at an article from February 1941. Popular Science published an article about an effort by 35,000 amateur scientists to observe and record information about the natural world around them.

They also tracked the speed spring moves up hills or mountains. From their observations, they calculated spring gains about 100 feet in elevation each day. So, if you had a hill 200 feet high, the spring plants at the base would bloom, then 2 days (200 feet divided by 100 feet per day) later, the same species at the top of the hill would bloom.

The article is pretty interesting and has some great photos. You might want to check it out!