Every project at NPC begins with a story. The story of family and community, and their connection to the land and waters of the region. But the story doesn’t begin and end there. With each project there is an arc. You know, the kind of arc your fourth grade English teacher taught you about, the arc of a narrative story…it kinda looks like a roller coaster 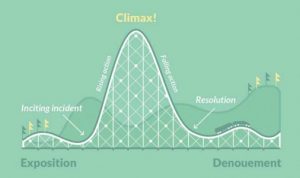 or a mountain range…

The story of how NPC conserves land is like a classic narrative in that it has a beginning, middle and an end. It’s never linear, and often it starts in the dark of night, on a Sunday afternoon, or in the middle of a rain storm.

There are many peaks and valleys, yes literally, but also figuratively. In the case of Kelley/New Garden, many players needed to play their part for the success of the acquisition. John Steinbeck couldn’t have made this stuff up!

A Cast of Characters

This story contains interesting characters whose paths cross and link through the acquisition of the land. County Commissioners, biologists, State Senators and Representatives, judges, lawyers and even a priest worked together to create communications and opportunities for the acquisition to move forward. Then there were the Kelley Estate heirs who had to agree to sell their portions of the estate in support of the partnership and conservation of the land, as well as the members of the West Keating Township community who used the land for generations to hunt, fish and at one time make their living. And last, but certainly not least, NPC’s director, Renee’ Carey and the Rocky Mountain Elk Foundation’s, Thom Woodruff, would work to partner with all of them to ensure the successful outcome of the project and the acquisition of the land. If I told you everyone who took part in the success of this acquisition, including NPC donors,  the list alone would be something like the opening of a JRR Tolkein saga!

An aspect of the climax came when the Clinton County Courts deeded the property to NPC. The next step at year two in the acquisition project, was to transfer ownership of the property to the Bureau of Forestry and the PA Game Commission. The two state agencies would then work to decide how the property would be divided. Once these decision could be made the Conservancy and the Elk Foundation would begin to move forward with the sale. This would take another 2 years. Who knew where this story would end?!

For one week, in 1999, NPC was the proud owner of 4,200 acres of Clinton County Forest. A week later, the land was turned over to The Rocky Mountain Elk Foundation to help offset the insurance costs. Then in the summer of 2001, 3,100 acres were dedicated as State Game Lands 321, and 1,100 acres became part of the Sproul State Forest. A happy ending for a four year project.

Today the property is comprised of fields, woods, food plots, meandering runs, steep wooded side hills and 3 1/2 miles of river frontage along the West Branch of the Susquehanna.

There’s Always More to the Story

We hope you enjoyed this post, it is part of a series of pieces highlighting the stories of NPC’s work in the region. Until next time…