The emerald ash borer is an insect less than an inch long, but is doing a lot of 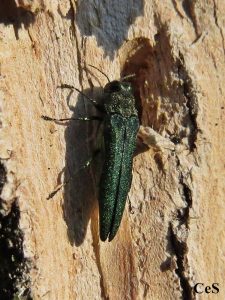 damage in PA’s woods. The insect is originally from northeast Asia and was first found in Michigan in 2002. Since then it has spread into many states, including Pa, and has killed an estimated 50 million ash trees.

Landowners are salvaging their ash trees as they die or even before. Dead ash trees deteriorate very quickly. Once the trees die, they are especially dangerous to cut or to leave near heavily used areas. The tops break out easily as well which is another possible problem. Another concern is since the trees deteriorate so rapidly, the trees quickly become a threat as branches and large limbs break off and fall.

The Bureau of Forestry has been proactive in removing ash trees along the Pine Creek Trail to help alleviate this threat.

NPC Board member Roy Siefert took advantage of January’s cold temperatures to harvest his ash trees. Roy’s property has some wet areas and the cold weather freezes things, making tree removal easier and not impacting the ground surface as much.

Because of site co 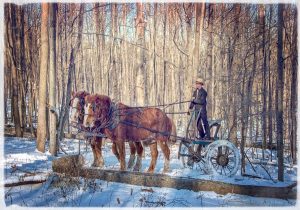 nditions Roy and the forester he was working with used mules and Belgium horses for the operation.

Mountain Home magazine visited during the harvest and carried a story in their March issue of the magazine. Roy donated the proceeds from the sale to a fund helping the sons of a logger killed while working several years ago, the Pennsylvania Forestry Association, and the Northcentral Pennsylvania Conservancy. Roy explained, “I own my woods for privacy and the wildlife, not to make money. This sale gave me an opportunity to support Andy’s boys and a couple of organizations that share my philosophy on conservation and stewardship.”

Singer, songwriter, and folklorist Van Wagner wrote a song “Ash to Ash” about his experience with the ash trees on his property dying. You can watch a video and hear the song performed by following this link Van’s YouTube video.