Northcentral Pennsylvania Conservancy Members Hold Elections to the Board of Directors 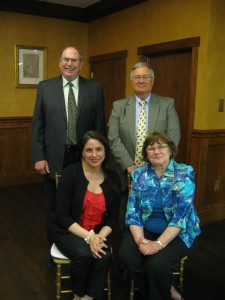 Plankenhorn (standing, left) and Hannis (seated, right) were recognized for their service, while Churba (seated right) and Schopfer (standing, left) were elected to the Board for first terms.

Churba, her husband, and their four children live in Loyalsock Township.  Prior to staying home with her children, she worked in Vail, CO as a meeting and conference manager.  Churba coordinated travel as well as meeting arrangements for Fortune 500 companies holding trainings, meetings, and conferences at Vail’s resorts.  She moved East and worked for Sparks Exhibits helping clients, such as Motorola, with their trade show needs.

Schopfer and his wife, Dorothy, live in the Cogan Station area.  He spent 29 years working for Lycoming County Government.  Schopfer first served as the Operations Manager for the Department of Emergency Services and then became the Deputy Director of Resource Management Services.  Over the years he has served on a number of boards and in a number of leadership positions, such as with the local Red Cross Chapter.

Rotating off the Board were Bonnie Hannis (Clinton County) and Charlie Plankenhorn (Lycoming County).  Both served NPC’s board as the Chair.  Additionally, Hannis worked on the Board Development Committee and assisted at the organization’s Spring Fundraiser.  Plankenhorn has been involved with NPC’s membership program as well as community outreach.