August is Water Quality Month! Water quality is a measure of the water’s condition compared to a biological, chemical, physical, or radiological standard. It’s important to remember that we can’t just look at water and know what its quality is by its appearance. Many things that are considered pollutants can’t be seen with just our eyes. 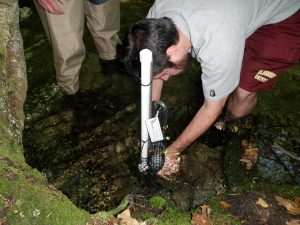 Water quality can vary from day to day and even throughout a day. Scientists at Bloomsburg University are doing research this summer that is looking at how water quality changes over 24 hours. They’re spending a lot of time in a local stream, collecting samples. Sunlight causes certain chemical processes to be active. When it is dark out and these processes aren’t active, certain water quality parameters might change.

Rivers and streams (which is where a lot of water can be found in PA) are constantly changing ecosystems that are challenging to represent on paper. Conditions, such as where samples are taken across the width of the river, can often affect the outcome of a water sample. Additionally, streams are affected by everything going on around them, agricultural practices, abandoned mine drainage (AMD), sediment flows, or even high rainfall, streams are highly sensitive to all sorts of events.

Conductivity
Conductivity is the water’s measured ability to pass an electrical current. It is affected by the quantity of total dissolved solids (TDS), often dissolved chemicals or salts, in the water. 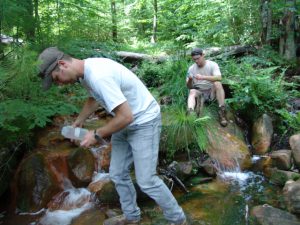 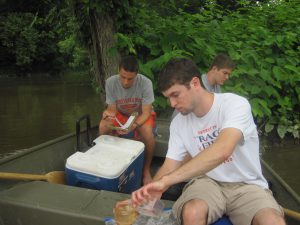 Despite the negative connotation of the word “acidic,” a waterway wants to strike a balance between having too many or too little positive hydrogen ions. In fact, ideal pH generally falls between six and eight in an aquatic environment.

If the pH is too far at either end of the spectrum, fish will avoid the waterway or die, eggs can become deformed, algae cannot grow as well, etc.

pH can be affected by many different sources including contaminated run-off and AMD. The pH can differ dramatically from day to day, or even at different times throughout the same day, largely as a result of photosynthesis.

Alkalinity
Alkalinity is the water’s ability to resist changes in pH. This is a natural phenomenon, but often with the addition of pollutants, water systems are less capable of balancing the pH and keeping waterways healthy. Since alkalinity can create a sort of buffer against various forms of acidic pollution, the higher the alkalinity the more resistant the stream might be to external influences like acid rain. Many rocks, especially limestone, are 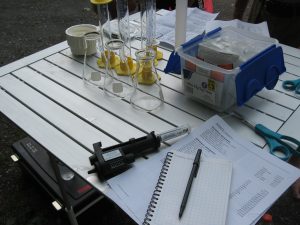 sources of natural alkalinity. If water can neutralize acids, the buffering capacity of alkalinity would give stability to the pH of a waterway necessary for fish, plant life, and other organisms to live. Affective alkalinity levels usually begin around 20 mg/L and higher.